Son no.2 has blessed us with his presence for the last few days which has been wonderful. During this time we managed to organise an evening out. Which is not as easy as you would think when son no.1 has such an extensive social life.

We then tried to book four seats at our local flea pit to watch The Kings Speech to find they were fully booked, which then sent out all of our timings and where we were going to eat for the evening. So it was decided that we would eat first and Indian cuisine was voted for, so we quickly rang an Indian restaurant that is so busy if you don’t book you can’t get in. Fortunately we were in time and secured a table. The food was delicious as usual and set everyone into a very good mood. We then had an hour and a half before the film so it was decided that we would take a trip out to ToyRus. I haven’t been there for years, it was great fun.

The boys did what they always did, ran off. It took me a while to find them. 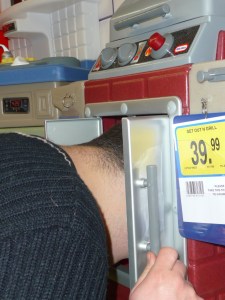 Son no.1 called to me just before cracking this joke with an oven. “I know how you feel love” I said and playfully pulled him out with a “Don’t do eeeiit” 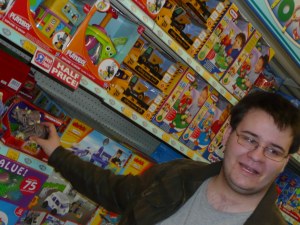 And then son no.2 found this triceratops which tickled him completely. This is him calling his brother over to have a look.

The triceratops moves his head and roars, look at the smile on the boy. 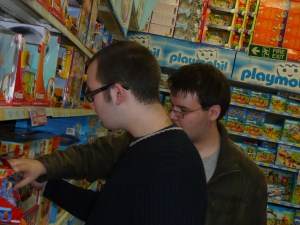 Yep son no.1 appears on the scene.

Son no. 2 deep in studying it mode. 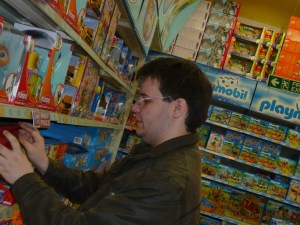 Ooh yeah, still looking at it!

And just one final examination of the power of its jaws.

Hubby was suitably impressed. (it may have been full tummy syndrome)

Studiously looking at the microwaves.

And then onto the Pizza. Obviously these boys need more toys, they even admired the washing machine! (at this point I could show you a photograph of the pile of washing son no.1 has just dumped in the kitchen, but I won’t be that cruel – Its a toy son, honestly!!!!)

There has been knitting, this is a cardigan called Audrey in Unst by Gudrun Johnston I cast on on New Years Eve and have been steadily knitting it ever since. My chosen yarn is Rowan Purelife Organic in Horsetail and I am falling deeply in love with it.

There are lots of nice little details on this cardigan, the twisted long ribs and the decorative lace to name but two. It is knit in the round and has an unusual way to attach the sleeves, which I liked, its a very nicely written pattern. Another week’s knitting and finishing and we should be there. I’ve knitted it on the smaller of me side so that I shrink into it!