A pie is a thing of beauty to share with others, glorious, steaming and just what you need on a cold March evening. A pie’s hidden charms will always be in the quality of its ingredients but with clever shopping and cooking these need not be the most expensive, often the cheaper cuts of meat slow cooked, think steak and kidney, or the off cut from a Sunday roast, think shepherds or cottage, will be transformed into a delicous entity of their own.

It used to be said that fish pies could be made with off cuts of fish, but who can afford to buy fish with that much waste these days? But the supermarkets have solved the problem, either frozen or fresh they do a fish pie mix, which is a wondrous product as they normally contain a white fish, often haddock or cod, a smoked fish again either haddock or cod – which you need in a fish pie it adds a lovely depth of flavour and salmon.  Roughly coming in at 390 – 400 grams for about £3.00, with the addition of some cheap prawns or even cheaper boiled eggs its a jolly good start to a pie for four.

Fluffy mashed potato and the end of the cheese grated on top. 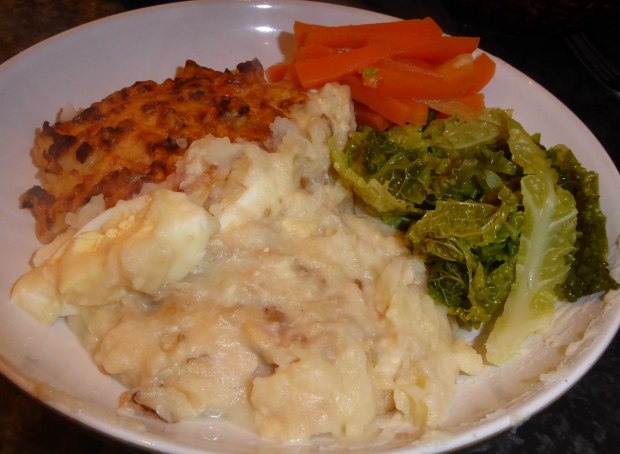 Add some squeaky savoy cabbage and julienned carrots for less than £1.25 a portion.

1 tsp Fennel seeds (optional) you could use dill or parsley, crushed.

butter and milk to make the mash and a big knob of butter for frying the onions.

Cheese, a couple of ounces should do it, more or less depending on what you have.

Salt and Pepper to taste.

Boil the potatoes and make the mash with the butter and milk, put to one side. Boil the eggs for 8 minutes, peel and quarter.

Fry the onions in the butter until soft, add the flour and milk to make a roux sauce, add the herb of your choice,  when smooth and bubbling add the fish and stir again until bubbling take of the heat and pour into your dish. Let it cool for a few minutes to make things easier, layer on the eggs  that were cut into quarters so everyone gets a bite and then layer on the mash and then the grated cheese.

Put on a tray and into a hot oven 180 C for half an hour whilst you prepare and cook the veg.