The results came back yesterday, Auntie Vi died of Bronchial Pneumonia. Gawd blimey, it was so sudden. She had lunch with her friend and then a few hours later was found. Her family and friends said she had been chesty for a while, as my regular blog readers might remember Mum and Dad had been staying with Auntie Vi when Dad was taken ill. I think she was chesty then, but at that time was still able to get around and cluck, cluck over her guests (as she loved to do). If only we had known.

My Dad is so lucky, or as in one of my favourite sayings, “Therefore but the grace of God go I” He had bacterial pneumonia, I wonder how or if this was related. It was touch and go for him at one stage.

I can’t get to the funeral, and although recently I haven’t seen Auntie Vi more than twice a year, most summer holidays as a child were spent with her and my Uncle, what with them always living by the sea. She gave All us kids, (there are lots of cousins) Good Times.

I went to Birmingham today (I’ll do that in another blog post) and on the way back, just sat there still, on the train, memories came flooding back, I think I must have just got over the shock, it was nice to have all the memories flooding back, yet upsetting at the same time.

Son no.2 starts his GCSE’s today. We as a family are relatively calm at the moment, (lets see how we are in a weeks time!)

He starts his exams with Religious Education, (which he chose as a subject to take) although he is a practising atheist, (he often, even daily at times, throws religious questions at me, I believe, he doesn’t and as I’m the only one that believes in the household I receive all of the religious questions, which can be slightly off putting over your cornflakes!) his grades are predicted to be very high. Which in some ways pleases me, he might not believe any of it, which makes him question it and therefore he learns. There is a wry irony to this.

He will have a scribe and a laptop because his handwriting is simply unreadable and it was felt that such a bright student shouldn’t lose marks just because it would be nearly impossible to read, therefore mark his work.

The hours spent gaming have stood him in good stead. He touch types at 35 words a minute, which for someone who has never had formal training on touch typing is really quite quick. I wonder how fast he would knit…

Me, well I’m looking at my bank account. We have a written formal and signed agreement (in duplicate!) on a pay a certain amount per grade deal. You have to be that orderly with this child, give him an inch etc. I reckon, if he does as well as his revision suggests he might, I may well be bankrupt by the end of the summer. I’ll have to get a bucket, blankie and dog (I can definitely do the dog bit) and sit outside my local yarn shop begging for money for wool…

A lovely, generous of spirit lady who will be greatly missed.

To Bean or not to Bean that is the question?

Or in other words, my precious runner and french climbing beans are really quite high to still be in 3 inch peat pots and are crying out to be put into the ground. But, will we have a frost or even a risk of a frost before the end of May. I am too nervous to risk it at the moment, which is why I am constantly checking long term weather forcasts.

Dads home, he came home on Friday, he gains strength and confidence every day. We are all very pleased. 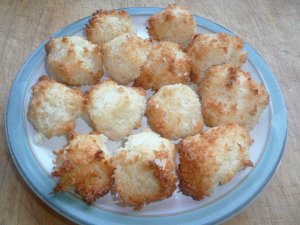 I made these for the Girls at Tuesday Night Knitting.

So I’d better write the recipe down before I forget.

Whip the egg white a little just to break it down and then mix together all the ingredients, it needs to become a firm texture.

Place in bite sized balls on a baking sheet which has oiled greaseproof paper on it. Pop in oven which is has been prewarmed to 180 C and cook for ten minutes, check after nine. So that they are slightly singed to a nutty brown. Take off tray and allow to cool on wire rack. I reckon they would be quite nice dipped or drizzled in melted chocolate as well.

It was hubby’s birthday yesterday and I made these for him. I didn’t make the buttons, I just made the buttons into cufflinks, I can’t even claim it was my idea, (thanks Girls!) but he was tickled pink with them and promises to wear them to a client meeting this week. (which will be the next time he wears a double cuff shirt)

There was going to be socks, but about a month ago, when I delicately asked if he’d like a pair of socks, he was perhaps not in a receptive mood so declined my generous offer. But then, last week, he moaned that I hadn’t made him a pair. I cannot knit socks that quick, well I can, but not nice, summery, cotton ones. So he is going to have to wait. (To be honest the knitting bug has left me at the moment, I think its because the plot is taking up my thinking time. Although I have just ordered subscriptions to a couple of knitting magazines this morning, so it is still burbling away in the background.) I tried reasonably hard (a day in Stratford upon Avon, a day in Leamington) to buy him something else, but the plain fact is, he doesn’t actually want anything, so we decided to keep it simple this year.

There was going to be cake, but then hubby didn’t want cake this year. So these went unused. A bit cruel I know, but son no.1 and I giggled like school girls when we saw them in the shop and just Had to have them and knew of the perfect victim, who unfortunately didn’t want to play. 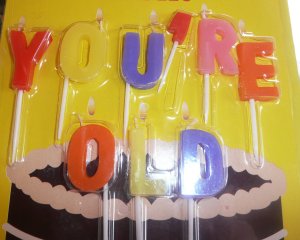 So, after a trundle around to some car boots, we sat and drank wine, whilst chatting to the chickens and dogs, went to bed for a couple of hours when the wine and the heat took their effect and later ordered a Chinese meal. It was nice.

Hubby in “I love my Dogs” mode. (three out of the four dogs) The dogs just ignore the chickens, and the chickens ignore the dogs, this took quite alot of dog training on my part. (especially with the terrier whose not in these pictures) 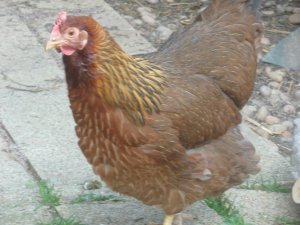 Its going to be scary..

But wigless I will be.

I miss the wind blowing over my follicles!

I’m making a pair of Fetchings at the moment. Well, I was until I threw them down in disgust half an hour ago because I have run out of wool on the last two rows (well three if you include the bind off) on the last thumb.

I have made these in exactly the same yarn (although a different colour) twice before and I knew it was going to be tight, but even with gathering all scraps and knotting (I can hear the gasps) them together, its just not enough.

Ugh, and, I had shown them to my Mum (the grateful, what was soon to be keeper) earlier.

My tension must have relaxed over the course of my rather young knitting career.

I don’t think I have any scraps of the bamboo yarn that I was using. Although I’ll have a rummage in better light tomorrow and there is a dim lightbulb blinking at the back of my brain that indicates that indeed there may be a scrap of something hiding somewhere. They don’t have to be perfect, as they were, (which is why I was using a bamboo mix and therefore washable) going to be used as gardening Fetchings to keep Mum’s joints warm.

And I was going to show you all, just how clever I was, (yeah right! (she can’t even buy enough yarn!!)) because one was cabled with a cable needle and one was cabled the way Carie had shown me, without a cable needle. And we would have ummed and aahed about what I perceive to be a slight but quite interesting difference and why that would be so..

I love our Araucana’s Eggs, she’s laying nearly every day at the moment so I am able to eat them in quantity. There are two resons I love her eggs so much, firstly, they taste richer than the other hens and secondly the yolk to white ratio is extremely generous, there really is very little white to yolk. As you might be able to see in the picture below, which has three Araucana’s eggs in it. Also they are smaller eggs which can be nice and they are so pretty. We had hoped to have a hen that lay blue eggs, sadly you can’t tell by looking at an Araucana which colour egg she will lay, ours turned out to be more of a khaki green, but I still get excited by that.

A line up of our hens eggs, the Araucana’s egg is at the top. Hubby is so much better than I at distinguishing who has laid which egg. I, normally under test conditions, (we are quite a sad family) can guess the Black Rocks, the Buff Orpington (lovely bird that one, my favourite, the Queens mums as well) and the Wellsummer, although she doesn’t produce as speckly an egg as she once did, off course I can guess the Araucana’s and by deduction I should be able to guess who the Buff Sussex is, but to be honest, I’ve normally become confused and sit looking at it. 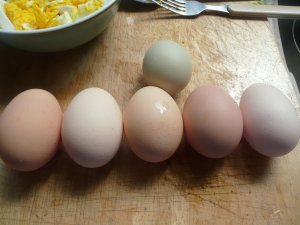 Just another piccie to show you the various colours. 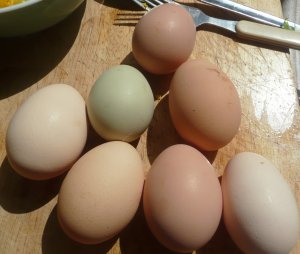 Considering they are four years old, (industry kills off egg laying birds after 18 months) they are still laying well and five out of the seven are laying nearly every day at the moment.