I’ve been racking my brains for a title and that is the best I could come up with.

It all started so innocuously, ten days before he was admitted to hospital, son no.2 came home with a queasy tummy and tummy ache. As you all know he is working out in fields all day with horses having great fun being a Squire at Warwick Castle and we just thought he’d picked up some kind of bug. I made fun of him, saying we had better worm him, we went through what he’d eaten, what he’d drunk, he’d been drinking water from a rubber hose, whether he’d put his lunch in a fridge all the normal things that you do and go over when your child isn’t at its best. And the days that followed it carried on, he then got tummy ache. I just couldn’t work out what was wrong and asked and begged and pleaded for him to go to the doctors, but he has such a strong work ethic and didn’t want to lose a half day or full days pay so carried on. I’ve since found out that he didn’t quite tell us the truth as to how much pain he was in. Then he started to itch, but put it down to laying in the grass and the insects biting him, it looked like insect bites at the bottom of his legs which fits with walking through the grass, but then started to scratch all over. Then he told me his poo’s had gone white. Alarm bells really rang and I begged him to make an appointment at the doctors which he did, for last Wednesday, he was in hospital long before that appointment came up. On the Thursday, after he had came home from work and I had been googling, I tried to examine him, but he brushed me aside telling me he was getting better, and he’s big and if he doesn’t want to do something he simply walks off and there is nothing I can do about it. Friday came and I really growled at him to come to the light and let me look at his eyes. They were a deep yellow. That tan that we thought he was gaining, wasn’t a tan at all, he had jaundice. I made hubby take him to the hospital and they admitted him, I stayed at home gathering his stuff together and went later.

I’ve beaten myself up so many times that I didn’t see it before, I’ve looked through old photographs from our day out at Warwick Castle and at the party Mum had before and his eyes are white, it all happened quite quickly.

Weekends are slow in many hospitals and we had to wait for an ultrasound scan on the Monday. I went in with him, and watched as the radiographer tried in vain to find the gall stones we had been promised by several doctors would be there, he couldn’t find anything. We were told the scan had proved inconclusive and waited for a CT scan the next day. On the Tuesday we were told that he had a swelling in his pancreas. My heart stopped. And an appointment was made for him to go to the Queen Elizabeth Hospital in Birmingham to their liver unit on the Friday. By this point he was going quite insane because of the itching and we tried our very best to keep him as calm as we could and as medicated as we could with piriton to help ease his situation, it didn’t really work very well, but it ever so slightly helped. We bought him ear plugs to help with the snoring of other patients. Being the youngest patient in the ward by about forty years is very tough.

Son no.2 asked for his blankie. Remember the quilt I was making, it had been completed and stowed away for Uni, he wanted it with him. We had before he was ill great fun naming his quilt and he had decided it should be called the Blanketron 9000, and in his words “Warmer than the Blanketron 8000 but not as expensive as the Blanketron 10 000” how we had laughed. 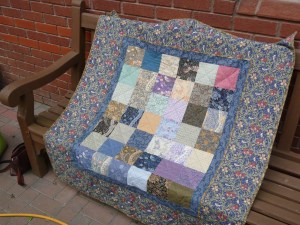 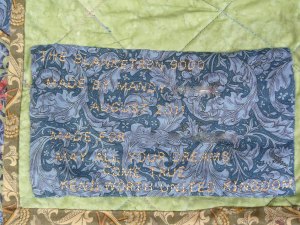 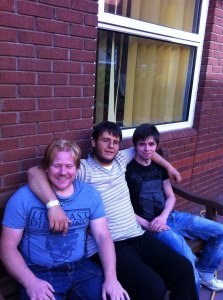 Whilst waiting for Friday, Sam and Andy came down from Leicester to see him to see him in hospital, they cheered him up no end. It was really nice to meet some of his university friends, they took no prisoners and carried on chatting to him as blokes do. I know son no.2 bucked up to the point that when I came back having left them for an hour, (I popped into the chapel and said a few prayers) that Oliver was stood up making Sam’s life a misery as he had managed to snare poor Sam’s phone and was trying to read and send naughty texts. I could hear son no.2’s name being called as I walked up the corridor and caught him at it, red handed, how we all laughed that I had caught him out.

They are very nice boys, and I am glad that my son has such a supportive network. One always wonders if your child is going to fit in and find friends at uni, I was glad to find out he had.

And then the days dragged on, the next day he was to the bone tired. I bought the chess set in that day. He thrashed me on the first game, he’s been able to regularly beat me since he was 12, but the second game, yep he thrashed me, but there was this one moment…

which gave him great concern, it was perhaps my finest moment of chess playing. It made us laugh, and then he thrashed me anyway.

We often sat in the courtyard off his ward. Very pretty it was and so unexpected. And as it was surrounded by walls was cool and often in the shade which was exactly what he needed for his constant itching. By this point he was tearing his skin to shreds, most notably on his legs, it was intense to see him like this.

We bought him the equivalent to a fun bag of toys and sweets for a child, I think the opening of it was much more fun that the prizes inside. It was almost like Christmas.

And we waited, and eventually Friday morning came and he was taken by ambulance with me at his side to the Queen Elizabeth hospital with his Dad taking the car.

The new part of the hospital takes your breath away, this is the entrance, I’ve seen smaller airports.

We went to the old hospital and saw the liver specialists. They don’t pull any punches these liver specialists, he either has a localised autoimmune pancreatitis or pancreatic cancer. The wipple procedure if it is cancer was explained to him and then during conversation the surgeon was told that his mum wasn’t a chemotherapy patient but one who specialises in autoimmune diseases. The specialist nearly leapt into the air with joy, he explained that he did not have my medical history and that put a new light on things. I and many of my friends and friends of friends are praying for all we are worth that this is the case.

We were told that he would need a stent in his bile duct and would have an internal ultrasound and biopsy, but they couldn’t fit him in today. Me being me, started to desperately try to find a way in which that could be done that day and nearly resorted to begging but just in time before I was reduced to a crumbled heap on the floor, reminded the surgeon that son no. 2 had had nothing to eat that day. Miraculously an appointment had been cancelled for 11.30 that day. We didn’t have time for the bloods that were necessary to be done, we ran from the old hospital to the new hospital in the pouring rain. I would have run to the ends of the earth, albeit it very slowly, but we made it in good time and he went straight in for this procedure. I think that was the biggest lucky break we have had.

He went in for the procedure and then we were didn’t meet up again for four and a half hours later. He’d been sent up to the ward and had been there for two hours but because of the unusual situation of grabbing that appointment the changeover had got cocked up. You can imagine just how his Dad and I were feeling waiting for all of that time. He stayed in over night, had the odd hiccup whilst recovering but is back home now.

He was on the highest floor, floor 7, his view from his window, its an amazing hospital. Brand new, things are still being finished off in it and the old hospital is slowly being placed in the new hospital. A & E was moved over just a month ago. 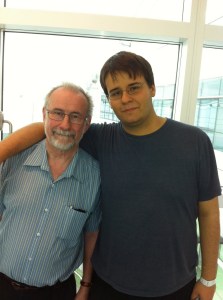 On the way out I took a pic of him with his dad, 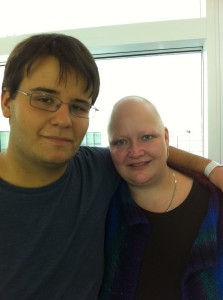 And one of me and him.

The jaundice will take a while to go, as will his itchyness, his legs are still red raw, and this is Monday, but it is lessening and he is coping so much better. 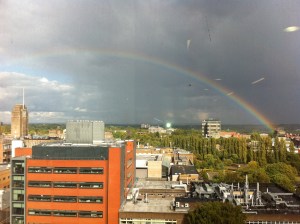 And on the way home, we saw many, many rainbows.

He is starting to act like a normal male teenager, nose in the fridge what with his appetite slowly returning and answering back, he always has an answer. Its normal, I am grateful. We await news.