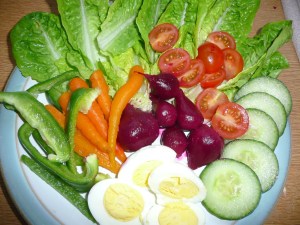 This is why I love having an allotment. Everything on this plate hubby and I – and the chickens! – have grown ourselves.

Tasty, fresh as a daisy produce, picked at a stage when I want to eat them. And not forgetting that not one of these delightful vegetables has been subjected to pesticides.

And I think we have done very well to be able to provide a lunch such as this at the end of October. That’s no mean feat. The carrots and beetroot are from a very late sowing, as are the little gems, the peppers are just about finished, they won’t ripen into a glorious red at this time of year. The cucumbers have done extremely well this year and I should have tomatoes slowly ripening for another month or two. I’m trying to grow a new variety to me of winter lettuce, I’ll let you know how it goes later in the year.

I think we should be able to continue with salads such as this for at least one more month, before the wintry coleslaw’s and bean and vegetable salads take over from the eggs and lettuce.

The cost, now the greenhouse and shed have paid for themselves, I think, including grain for the chickens, probably not even 25p per plate. (obviously not including man hours – but then who includes man hours into a favourite hobby!)

I know when I do need to buy something in the way of vegetables from the shop its always a real shock to me just how much everything costs. I’ve had to start buying onions again as I ran out last week, although I’m using leeks where possible in most recipes, (we have lots of leeks!) and I shall be running out of potatoes in the next fortnight.

In the old days there was such a thing as a potato man who delivered sacks of potatoes to you from the back of his truck. Tasty, fresh, locally produced spuds and they were cheap. Now your lucky to find an independent green grocer on the high street. Hey Ho.

One thought on “Lunch.”