I don’t know though, I have never thought of age being an issue, which is probably why I was happy to marry a man many years my senior. As it happens he is Much fitter and more agile than me these days, so you never can tell.

Anyway, it was hubby’s 65th birthday today. I think hubby would have rather gone to work, bless him, but I think you should take a moment to mark the passing of time.

In most recent years it has been rather warm by the start of May but this year we have all had rather a slow start. This is most apparent at the allotment but I have also noticed this in the way the bulbs at home have flowered and I had only just spied bluebells flowering last week. I know that Crackley Woods, (which is such a wonderful name for a wood) is covered in bluebells at the end of the spring and I hoped that they would still be in full bloom. They were.

We had a lovely hour wandering through the woods. The smell of the Bluebells was intoxicating, the sounds of the Blackbirds calling and marking their territory was intense. Spring is definitely in the air. 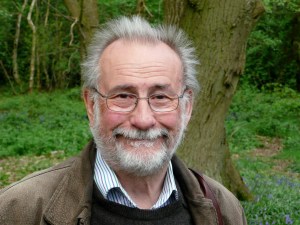 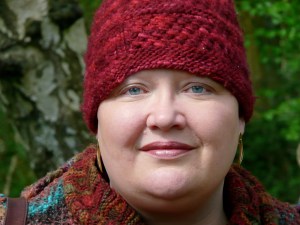 Aren’t these seats rather nice. 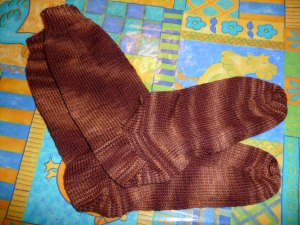 I made him socks, (3 days notice but we won’t go into that, only to say that I had asked a month previous!) Wollmeise 80/20 Fratello, he loves them. (that makes me very happy)

We had a lovely time at our favourite restaurant in Birmingham, Chung Ying, it has rave reviews, we order of the Dim Sum menu at lunch time and it is wonderful. We have been going for twenty odd years and it has never changed, that is a recommendation.

And then we went to the Birmingham Museum and Art Gallery to see the Staffordshire Hoard. It is only a temporary exhibition, it just gives you a flavour of what is to come. Its terribly exciting though to look at the intricacy of the work. At the moment the belief is the objects come from between the sixth and seventh centuries. As somebody that likes to work accurately I can completely understand how goldsmiths at this time were working with an extremely rare commodity and wanted to make the most of each of their pieces. I loved their work and am looking forward to seeing a much larger exhibition.

And I made him cake.

There is a story behind this actually. Hubby does like fruit cake, fortunately in a happy accident on his 42nd birthday I hadn’t known him for very long and had no idea what to buy him for his present so I made him a birthday cake, which was a rich fruit cake Delia Christmas cake recipe. (that woman has done me proud) He loved it – need I say more! My icing abilities have never improved but my cake making abilities stand by themselves.

Although son no. 2 was desperately trying for 65 candles I thought 3 would be more elegant and much less of fire risk. One for each of us.

And a cake that should last until next week in a normal family, personally I give it until Thursday! ‘Gannets’ is the word.

Oh and just before I forget, the sewing group loved their treats, there was very little cake left and just under half of the short breads. They really liked them.