Today very sadly we lost our beloved ginger boy, Boswell. He came to us as a rescue in a very strange way. I was in touch with various local rescue societies as we helped transport dogs in need when they were desperate for help just at the time we lost our beloved cat called Brian, our black and white fluffy cat who I completely adored, I’d show you a photo, but they are not on digital. I was a very sad girl as Brian was much loved.

Then a doggy lady in Birmingham who I knew got in touch because she had been feeding a cat who wasn’t her’s and had found out a neighbour had also been feeding him who had threatened to finish him off, he had become a pest and this ladies husband was not best pleased and would do the job willingly. With much blessings the cat was dog friendly. My immediate response, “Bring him here” which she did in less than an hour.

We dog tested him with Charlie my super friendly golden retriever and they said hello to each other in a very calm and collected way and we decided he was ours.. .. what a story that is. We got him sorted out at the vets and micro chipped him, the vet thought he was about five which was over ten years ago.

A very tentative Boswell on his first day.

Over the years this cat has rung us ragged. He liked to stay with other people until they or he became ill and we always picked up the pieces and sorted him out. Our boys became disenchanted with him often asking me how I could love him when he came home, often skin and bone and I said “Its like the prodigal son, and killing the fatted calf” as I opened a new tin of cat food and enticed him to eat and drink as this cat who was his former self dragged himself over the door step. And when the boys said “But how can you, he is a traitor to us, he abandoned us”, I used to say “Would I not welcome you” to which they became quiet. I think it takes a while for children to understand a mothers love.

But never the less he came home in his retirement, well mostly apart from he got lost in the ice and snow this winter when two RSPCA chaps arrived at the house and asked if we had lost a cat, I’d been fairly sleepless for a few weeks by this point and thought they were bringing bad news. We found Boswell had rehomed himself yet again down the road. He was getting pretty senile by this point. We brought him home yet again where he stayed, we sorted him out again and got him back to full health.

Far too suddenly his health failed beyond repair. Today we had to say goodbye.

I’ll leave you with my favourite photo’s of Boswell. 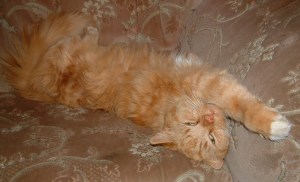