On Friday I rose at the crack of dawn and hubby and myself readied ourselves (hubby was driver to the train station) to pick Noelle up along with I to catch a train to the NEC, we were both giddy with excitement of what the day would bring. We had both volunteered to teach hand knitting at the Knit 1 – Pass it On stall which is funded by the UK Hand Knitting Association. In return for a couple of hours teaching we were given an exhibitors pass, which was gratefully received. We had a very fun two hours, I knew from past experiences that Noelle loves to teach, she has a way with her and got on very well. Me, well I bumble along like I usually do, but I got there in the end and was able to teach cast on, purl, knit, how to pick up stitches if they were dropped (I think that is really important it takes the stress out of learning to knit if you know how to pick those stitches up) and cast off.

Before our session at Knit 1 – Pass it On we had much fun. I hadn’t took my camera so you will have to rely on me that there was much to see in the arty side of things, we could have stayed all day, but shopping called and during the morning I saw Pauline Ineson‘s stand, she who I worship from afar was giving free workshops. I stopped most abruptly and swiveled my head with the speed of a velociraptor spying game with a gasp of “Oh its Pauline Ineson” and wandered over to see what was going on. Only to be told there were free workshops afoot and that there were places available, can you even try to imagine just how giddy I was at this point., I doubt it. Noelle and I quickly booked up for an afternoon session and then headed off.

Later, much later we came back and settled into our seats to listen to Pauline, she was a wonderful teacher. And soon we both had this,

Firstly we learnt the secrets of candlewicking which is the middle section and then were swiftly taught how to make wavy window tucks. Then, if that were not enough Pauline came over to show us just how to mitre the corner of the bias binding that was included in the kit. Doesn’t it look interesting, I have sheer jewel like silks in my imagination to make this project shine.

And then all too soon it was time to go home, although just before we left I had asked if they need more volunteers over the weekend and was told that they might be short on Sunday and so was able to come again to the show.

Come Sunday I was raring to go, even with the loss of an hours sleep with the clocks coming forward I was off again. This time, I had carefully looked at what is available and as soon as I arrived quickly booked myself onto available courses with the go ahead of Fred, (manager of knit 1 – pass it on).

And I took my camera.

With the benefit of the exhibitors pass I was able to gain entry before the general public so took full advantage to photograph (with permission) the Above and Below the Waves Knitting Project, created by Alison Murray, she who also created the 25ft Christmas tree and the most wondrous Gingerbread House. This time Alison is raising money for the RNLI (Royal National Lifeboat Institution), a very worthy cause.

Oyster divers, can you see their string of pearls on their purses and their daggers to open the oysters with? 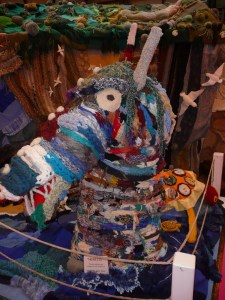 Called the Nemesis, “Yep, I would think that would be my worst enemy too” 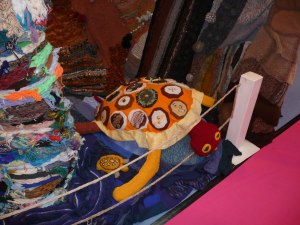 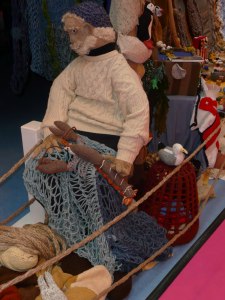 And this fisherman in a full scale adult sized aran jumper!

Punch and Judy with crocodile with his string of sausages, whilst families watched. (I love this the most) 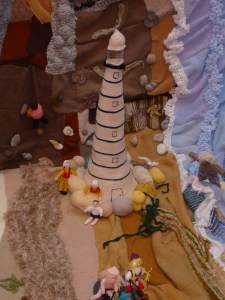 a light house with people enjoying themselves. 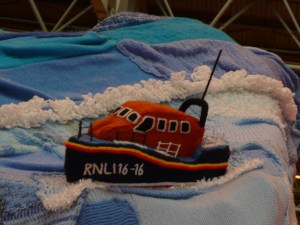 a RNLI boat fighting against the huge waves.

Under the sea in a tunnel you walk through which was magical and beautifully lit, you have a beautiful mermaid, 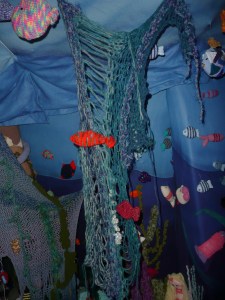 a huge shark….oooh he was scary. 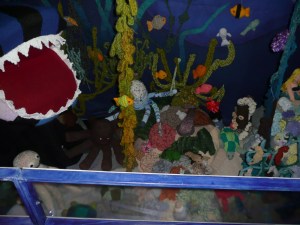 such atmosphere with coral, octupus, shells and crabs.

and jelly fish and sea weed, (there was lots of sea weed in the photo’s, you just have to look for it)

And then there was time for the workshops, which were all given for free by very gifted tutors. Today I learnt how to… 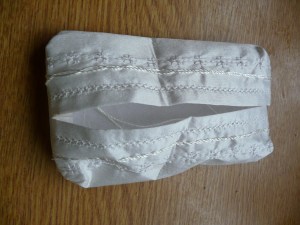 There was Wing Needle and Criss Cross Chainstitching by Pauline Ineson to make a cover for a packet of tissues. 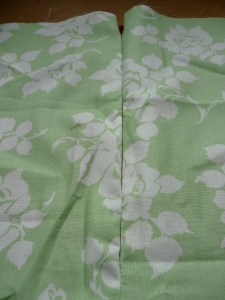 I made a concealed zip, from the dress makers workshop which I thought was amazing, considering this was a red zip can you see it?

I am very pleased with this technique. 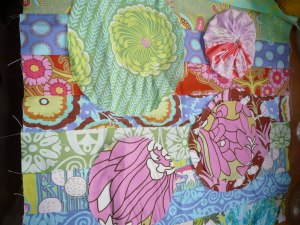 Next was Amy Butlers “Blooms quilt” this was fabulous, I enjoyed it immensely, my cushion is not finished by you can get the idea.

And just before joining Knit 1 – Pass it On, I passed Pauline Ineson’s stall and noticed that there were three sewing machines not in use, I asked Pauline what had happened and she asked me if I would like to join in, not a second passed before I said “oh Yes Please” (we later learn’t that the clocks going forward had thrown the participants)

We learnt Shadow Applique by Pauline Ineson, silk was used to shadow the applique dove and we made it into a pretty card. (the purple pen will fade with sunlight)

I met knitters who I know and love, blog readers that recognise me (once seen, never forgotten) and others that know me from just being at the shows, it was wonderful, I had a wonderful day.

On a much sadder note, I came home to find that a favourite Uncle had passed away, he was one of my favourites not least (although not a blood relative) he was alopecia universallis from the age of five. He was a staunch supporter of me and everything that I have gone through and I will miss him very much. And strangely I have the perfect card, made today, to give to my Auntie. Perhaps it was meant to be.