To be honest this was not a roaring success, although I did manage to rescue it. I found  Sticky Plum Flapjack Bars on the BBC Good Food website. Having followed the recipe and even popped it in the oven, I had a moment of clarity a few moments later and realised it was much too liquid to set so retrieved it out of the oven and bunged into the pan at least another 100g maybe 200g of oats and mixed them in until it looked right. It was only after I sat down with a coffee while it was cooking that I read the reviews to find others had had the same problems – always trust your instincts, much better to go with those than follow something to the letter and waste all of your ingredients.  Then I turned the oven down for two reasons, I was doing a double batch anyway so it would taken longer to cook, but with all the extra on top it risked burning the top before cooking through.

Firstly gather your fruits, an abundance of plums that my resident fruit bat wasn’t getting through as quickly as usual, so rather than waste them I thought I’d make him his sweet treat with them.

Half and stone them and then roughly chop. 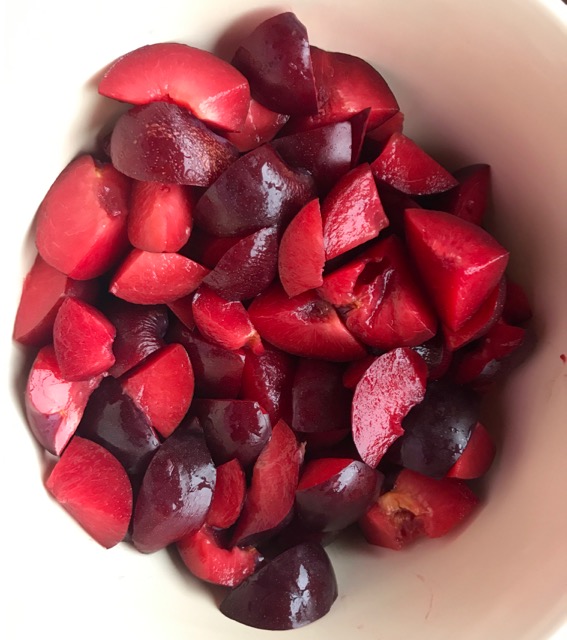 And put into a bowl to macerate with some of the sugar and mixed spice.

After cooking, having checked it as thoroughly as one can, cut it into even pieces and let it go completely cold in the pan.  Some people have even recommended with this recipe to pop it in the fridge to truly firm up.  I then popped half in the freezer for another time and left half in the fridge.

What’s it like?  Well it is good actually, once it has firmed up, it has all the good things of a flap jack, the golden syrup, the butter, the crunchy bits, along with a softer almost cake like centre from the addition of the flour and plums. Interesting and quite satisfying, although one does only need a small piece as it is a stick to the ribs, that’ll get you through a hard 1950’s winter kind of fuel.

2 thoughts on “Cake is in the house – Sticky Plum Flapjack Bars.”