“If a picture paints a thousand words,
Then why can’t I paint you?
The words will never show the you I’ve come to know…”

And with those songs in mind. What does this picture say to you? and if you could talk to her, what would you say?

I am sure without any doubt that Florence and Eric’s previous owner was a knitter or just liked knitted and mostly wool at that garments. Florence understands the beauty of wool and has since the first day she found her paws under our kitchen table. There is no hesitation in her mind, she saw the sleeves placed there for sewing up, marched over to them and carefully positioned herself such as that even her tail is carefully tucked under her near the wool, this in a centrally heated home where a cat can stretch out for a tummy tickle and not in any way feel the cold. 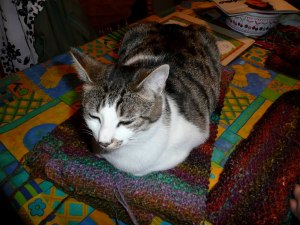 That is a cat that knows what wool is all about.


Eric on the other hand..

Eric likes quilts, especially goose down quilts. (its the cat in him!) Eric was a little bit frightened of the dogs when he first arrived. I remember the vet asking me how the dogs had got on with the cats and I replied, “Oh the dogs are fine, they just see a running cat in front of their noses, and say to each other.. “Oh, speeding cat!” Where upon my vet laughed and remembered we had sound cat friendly dogs. It took the cats a little while to realise that the dogs were actually okay. Hubby has seen (but sadly not photographed) Eric in the arch between Pip’s (dark lurcher on the quilt) chin and his legs all cozy together.

And life would not be complete without a blog post about Charlie, which is actually why I have decided to post this evening.

I’m over 80 percent improved since the worst days of the pneumonia and the cracked ribs are just about healing, they still cause pain at night whilst getting into bed, laying down is a problem. In the 3 months that I haven’t been right, but especially the last 2 months I have asked for my family to groom Charlie, he needs it so. There have been attempts, I knew they were half hearted, but I had to say thank you very much and keep the peace. Both children ignored my pleas completely. And I can’t whinge at hubby too much after he’s done a full days work, cooked supper and cleaned the place a little bit.

Today the sun was shining and the sky was blue (and how often do we see that) and I felt well enough to do what I knew was going to be a big job. Basically I couldn’t put it off any longer, it was making my heart bleed just seeing the state of my well loved dog.

The top and sides of him wasn’t so difficult, although a fair amount of fur came away, but I realised I needed to groom his belly and legs, Charlie is very furry underneath and I could feel huge soft knots of fur. I tried to get on the floor with him, but the pain in my legs was too much (polymyalgia, fibromyalgia) and I had to give up. (Charlie licked my hand at the very moment that I gave up, he knew that I couldn’t do it) So I had to invent a new plan, because I couldn’t leave him like this. And there is one thing I know about this dog, if he can do it, and if I can portray to him what I would like him to do, he will do his utmost to accommodate.

Now Charlie is not normally allowed on the kitchen table. Its not a place you normally want a golden retriever to go, but bearing in mind Charlie and I used to do a little bit of agility when we were both much younger I knew he would master what I wanted from me fairly quickly. Bearing in mind that he is 10 now, there is no way I could run him to jump onto the table. So I placed a kitchen chair by the side of the table to use as a step and it only took me three attempts before Charlie was safely laying down on the table, legs akimbo waiting for a tummy tickle. Snip, snip, snip, brush, brush, brush and you have this… 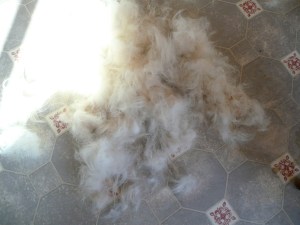 I reckon we could knit a small poodle out of that.

and a scrunched up, just about to go into the bin photograph.

“Look into my dark brown eyes”

6 thoughts on “If I could talk to the animals.”