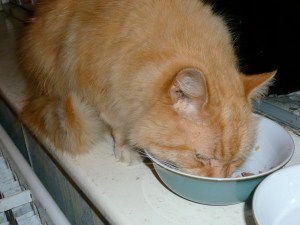 Boswell is a beautiful cat (if a little grumpy) and came to us as a stray nearly ten years ago when had been found wandering in Birmingham. We loved him so and he was happy with us for a couple of years but the old lady a few doors away decided that she loved Boswell too and called him Sandy. Now the old lady had a history of kidnapping or should I say catnapping peoples pussy cats and then leaving them in distress when they became old and sick so I wasn’t best pleased when she took a liking to Boswell. I tried to talk to her, its very difficult to talk to someone that looks and acts like she is in the throes of senile dementia. I spoke to her daughter at length and asked her to ask her mother to stop feeding our cat and to stop the carers buying cat food. It all fell on deaf ears, Boswell became fatter and fatter and it wasn’t us doing the feeding. It made us upset but what could we do without taking some sort of legal action, I then phoned a solicitor who specialises in dogs and the law and we both agreed that taking a very old lady who was senile to court wasn’t the best plan in the world.

I even put a collar on him with his name and phone number and on the back it read. Do Not Feed, Diabetic Cat. It was completely ignored.

So although I saw Boswell occasionally and when I could grabbed a hold of him to throw worming tablets down his throat and douse him with flea spray there wasn’t very much more we could do.

I often wondered what would happen when the lady became too old to look after Boswell, because all things being equal I knew he would probably still need caring for, well I have found out what these caring people chose to do about his care all these years on.

Hubby saw an ambulance at the old lady’s home over a week ago and sure enough within 48 hours I notice Boswell is wandering around our home looking lost and lonely. The next day I enticed him in and opened a tin of special ‘just in case you need it and you won’t eat dried food’ cat food. It was like the return of the prodigal son and killing the fatted calf. And what was once a huge weighty cat has turned into skin and bone. (I know the photographs look like he still is a large cat but that is his long fur) Who knows how long he hadn’t been cared for. I worry that they will have an attack of the guilts and decide to take him to the nearest rescue centre. He is micro chipped in our name so I am hoping that he would come back to us. Should I write a letter to them? and saying what exactly? It all fell on deaf ears before, would it spur them on to do something like that. Its all very confusing.

But he is home, he was incredibly dirty, ate a tin and a half of cat food within an hour then slept for 24 hours. I am glad to see him home and Boswell seems to be glad to be home too, we are a few days in and he’s accepting the new whipper snappers also known as Eric and Florence and they are accepting him. Although they don’t quite understand why Boswell is on the tinned food because they would rather like that..

4 thoughts on “The Wanderer Returns.”