I have been waiting for inspiration on what to teach the boy this week, first there was the idea of muffins, then the idea of a steak and kidney pudding as the boy insisted that nothing savoury could be called a pudding, and then there came the attack of the munchies in sushi form, which the boy was wolfing down. I thought Sushi would be a good thing to teach the boy, not least to save himself and I from bankruptcy because of the price of it ready made.

The boy especially likes Maki, and the last time I made those I couldn’t get the rolls to stick together, since then I have been watching the masters at Yo Sushi and realise just how much they press the rice firmly onto the seaweed, it seems that was the magic trick I was missing.

We have also bought a rice steamer, which makes the rice soft but not soggy and we use the correct Japanese sushi rice, which is sticky and sweet. You must make sure you season the rice with Sushi vinegar after cooking, either home made or already mixed in a bottle.

There are no vegetables in the making of this Maki, the boys just wanted fish and rice, I think a little grated mouli on the side just to lift the palate makes a lovely addition, we served the Maki with pickled ginger and wasabi. 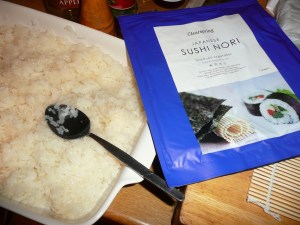 Ingredients at the ready,

and I am off to a good start. 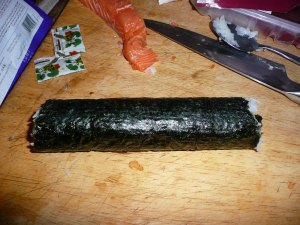 now sliced. Over to the boy,

Doing an excellent job of placing the rice on the seaweed,

He has a very nice knife action. You need a knife with a good sharp blade, these are very old knifes with a carbon steel blade, they rust like buggery but are worth it, because you can hone them to a really sharp edge, simply not achievable with stainless steel knives – which you will notice we tried in the previous pictures before settling on this knife.

Rather excellent for a first timer don’t you think? One more tip, if the knife starts to stick and drag, wet it.

And then the boy experiments with how much fish can he put into one roll. (I am not sure the Japanese would have mixed their fish, but it was yummy none the less)

enough for supper for all of us and a midnight snack for the boy. They were lovely.