About four weeks ago I happened across a documentary talking about Leonardo Da Vinci and his forthcoming exhibition at The National Gallery, London, I was mesmerised and called to hubby to ask him if he wanted to go, which he did. Just at that moment Son no.2 mooched into the living room so I asked him and was met with a very positive response, next I rang Son no.1 who was enjoying the high life in Sheffield with his friends who are at Uni there and could not get through on his phone. I quickly ordered three tickets, noting that Friday’s were going very quickly, and Saturdays and Sundays were almost sold out! Son no.1 rang me back less than thirty minutes later and said he would like to go, I went back onto the net to book his ticket only to find that the slot we had booked had completely sold out the 38 spaces that were left so I managed to secure him a spot half an hour later. (fortunately they let us go in together)

A few weeks later hubby was very excited to find very cheap train tickets so we were all ready to go.

Settled on the train, 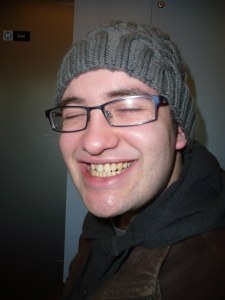 with boys giddy with excitement!
Soon we were in London and hubby negotiated the underground with his usual style, being born in Watford it holds no fears for him and he seems to automatically know which way to go. Very quickly we arrived at the National Gallery, ready for coffee and cakes.
Oh the choice.,

First this side of the buffet,

and then this side. And the savouries of fish pies and steak and stilton pies looked like they would keep you hale and hearty on a day out in London. I had heard that the National Gallery does good grub, I can confirm that it does. We ate our cakes in silence they were so good and then after an infusion of rocket fuel caffeine for the boys and a delicate infusion of caffeine laced breakfast tea for me, we were ready for the off.
The boys whizzed around the exhibition in just over an hour and then went to play in Trafalgar Square, we spent three hours on it. I think you grow into the arts, the boys may be a little young to really appreciate what they were seeing, although I think they enjoyed it. I loved it. To be able to see Leonardo Da Vinci’s work up close and personal was wonderful, many of the paintings were without glass or being roped off. You could see every single mark of the brush, although you get an idea as to just how good his work is from the prints in books and on posters, to see the detail of the ear of the ermine for instance or the way the blush rises in the face of the young women and the clarity of the lens of the eyes, it is just spell binding. I had quite an emotional moment when I saw and studied at great length Christ as Salvator Mundi, Leonardo’s newly discovered lost painting. It rocked me to the core and tears were flowing from my eyes, I was completely choked up. It gripped me with emotion, I’ll never forget it. The drawings, of which there were many, held my gaze, it was most amusing to find Leonardo’s humour mixed in with serious sketches of works in the making. Thankfully the audio guide does a wonderful job of enlightenment where we can all become experts of Leonardo’s work with just a few clicks of a button – isn’t technology wonderful.
Just as an aside, although the tickets for this exhibition were sold out weeks ago, they are releasing 500 tickets per day. It looks like they are doing this in stages during the day as the queue for these tickets seems to be permanent, but if you got there very early, it would be doable. Might be worth ringing to see exactly what they are doing. 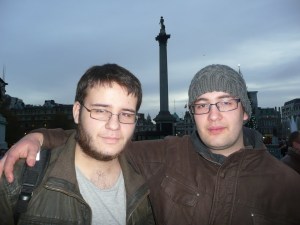 The boys in Trafalgar Square,

and us.
We then decided to go to Hyde Park and see Winter Wonderland.

This event is huge and I am sure we would have been better placed to enjoy it if I wasn’t dead on my feet, what with my left hip telling me in no uncertain terms that it wanted a rest. 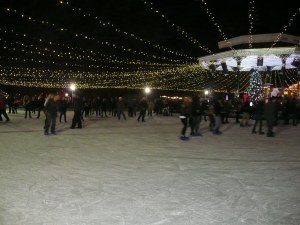 I loved watching the ice skating

and this ghost train looked very scary to me. But as we were starving and tired it was time to head to Soho to the Chinese Quarter for supper.

One whole Crispy Peking Duck later and we are feeling more like our usual selves.

and then a very enjoyable main course to follow.

And then we were done, it was time to go home,

So we caught the tube to Euston and home we came.
I had plans for Saturday which had to be cancelled due to the hip but struggled forth on Sunday as I simply didn’t want to miss Shugborough Christmas Candlelit Evening.
We arrived early and after a quick jaunt around the gifts and crafts marquee, we stood in line to enter the house. As we slowly trudged along I noticed the ground lights gave a magnificent silhouette puppet show against the house

with us as the main characters!

We had a fire eater for our entertainment whilst at the same time being able to hear carol singers and brass bands whilst we waited in line.

And the chandelier looked magnificent. 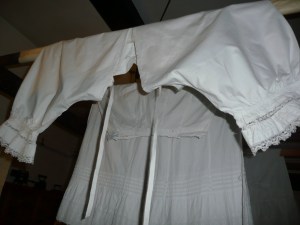 and the washer woman was doing a wonderful job with her whites! Those bloomers would keep the breeze out.

When hubby saw the stove with irons he reminisced about a company he designed industrial laundry machines for having one of these in their lobby. 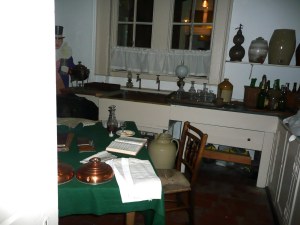 The Butlers pantry, having been called away whilst drinking the sherry!

Food being prepared in the kitchen,

Shugborough has a wonderful coach house with many coaches, this one is their State Coach which would be brought out on only the best of occasions.
We had a wonderful evening, but soon it was time to go.
Hopefully my hip will recover enough for next weekends adventures – stay tuned!

2 thoughts on “A busy weekend in December. (picture heavy)”