May 8, 2012
The challenge is going very well in the sense that I don’t mind sewing every day.  I’ve missed two days so far both of which were because I was working out the quilt and cutting out.  My maths and organisational mind on geometric shapes are not my strongest of points so it probably takes me far longer than most to apply myself to the task in hand. Also I don’t have a right angled triangle with a 45 degree side so I had to use the lines on my ruler, which is fine for the first few sections but occasionally you lose track of what your doing and you can feel your brain begging for time out.

As you can see I decided on a quilt for Mum’s birthday rather than place mats, it seemed like a good idea at the time. 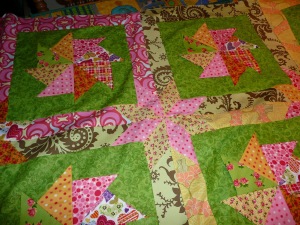 As did adding an addition detail of a flower in the fabric outlining the squares. 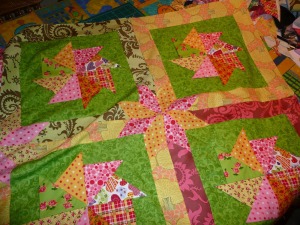 There are faults galore, and I am seriously thinking about ripping open one of the flowers as it is very baggy, and I am not sure why.  Some of these seams have been ripped open and re sewn four times. 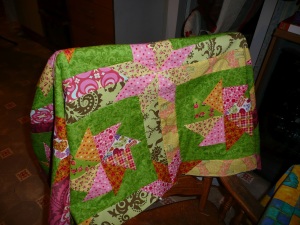 You’d think with that sort of dedication I would be able to manage to get nice clean points on my flowers, nope not a chance.  Whats that?  You heard a comment from a blind man astride a galloping horse and he said it was fine. Well at least it will keep my Mum warm, it looks like she’s going to need a summer quilt.
I am just over half way on the piecing and then I am not sure how I am going to quilt it, ideas much appreciated.  I know I am going to leave the triangles in the centre of the squares as they are doubled over in fabric and each one is a pocket, I just like leaving them open. 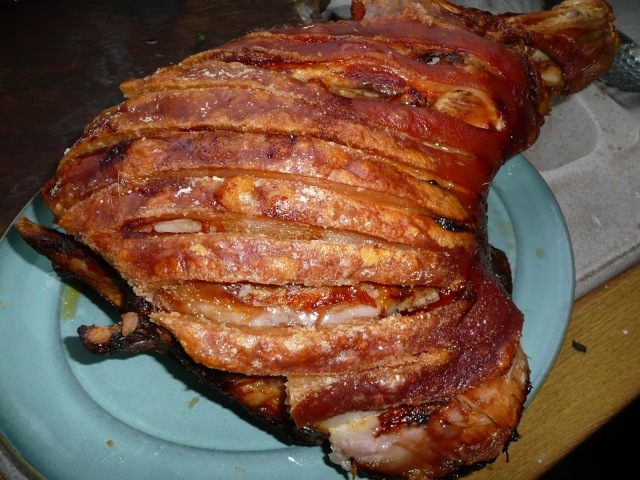 Fortunately there was sustenance, we happened to be in Wing Yip  in Birmingham, (who we have been going to for twenty four years) stocking up on our Chinese ingredients when we came upon a very large shoulder of pork with the bone in weighing over 6kg and costing only £12.99  If there is one thing the Chinese know about its pork, so we heaved it into the trolley.  Today hubby cooked it very slowly for six hours and then crisped it up at the end, the crackling was heavenly, the meat you could cut with a spoon and the flavour was rich and concentrated, it is the best pork I have ever had.   Son no.1 arrived, the four of us ate our fill, sent Mum and Dad a foil container full of meat and gravy and still have enough to feed us three for a good few meals yet.  Hubby and I are seriously tempted to have this again for Christmas dinner, it was that good.