I think one used to be slightly judged if you loved anything that came from Ikea, well twenty odd years ago you were, how times have changed.  Now it has a following of which I am one who approve of how they manage to design reasonably priced furniture that, it has to be said, as soon as you get out of the price bracket of Billy the bookcase is starting to look quite good.  And whats more, the design, according to hubby who just built the last bookcase is a marvel to behold,  he told me in great detail how the bookcase, which is as sturdy as any pine creation made by hand, just clicked together.

But what I hadn’t bargained on was their eye for plants.

I bought this over a year ago.

An Orchid, a Phalaenopsis apparently.  It was cheap, less than a fiver, there were lots of colours to choose from and I chose this one for the deep velvet purple and that the stem with the flowers on had split into two, so double the blooms.  And then it flowered for ten months, it was amazing, it went on and on and on.  Just when you thought it was going to stop flowering, a few more flower buds would form and off it would go again.

So when it stopped flowering I popped it onto the kitchen window sill and it seemed to like that space too and promptly shot up a couple of flower spikes.  After two months of no flowers its in full bloom again.  I’ve not fed it, I’ve not done anything apart from not kill it. Its dried out plenty of times, but apparently they like that. 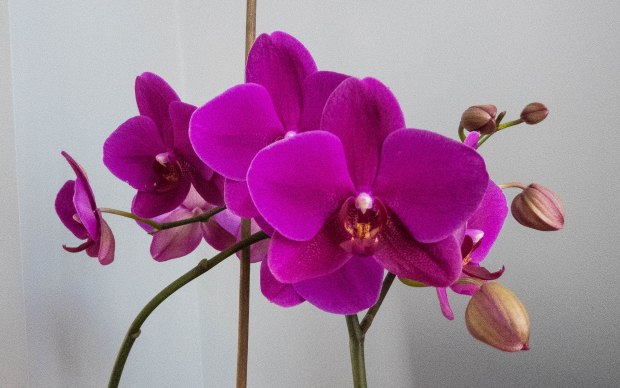 And the best part, its already sending out two more flower spikes.

Such a glorious plant, from Ikea, for less than a fiver.

Who’d have thought it.