In London I get my shopping delivered which rather leaves me at the mercy of my personal food shopper, but I have yet to be disappointed by whoever they have been, they have been taught very well.  In my economy bag of peppers were these very good sized yellow peppers and it got me to thinking of what I could make with them.

Being on a home made soup jaunt at the moment I thought they would turn into a very delicious yellow pepper soup.

So with a light spray of oil to help blacken their skins I popped them into a medium hot oven, twenty minutes later I added a handful of miniature plum tomatoes that had been lurking in the kitchen, a sliced up onion and a handful of garlic cloves, skin left on.  Another quick spray and popped them back in the oven for another fifteen minutes. 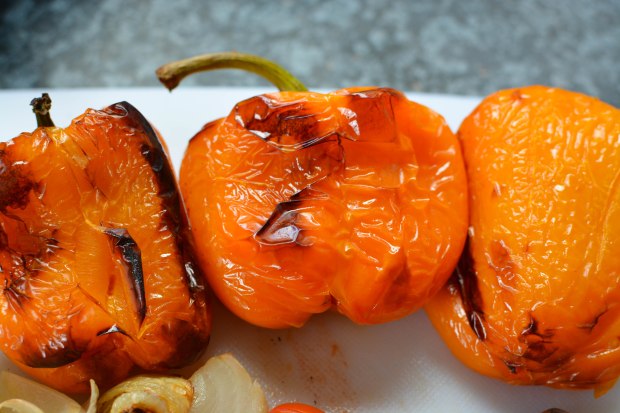 Or until I had this.

I then left them to cool a little, there is no reward in food heaven for scorched fingers and then popped off the skins of the peppers, tomatoes and garlic.  By that time I’d boiled two pints of water with a stock cube and then slide these ingredients into the same pan.  I then whizzed with my trusty stick blender and tasted.

It needed more salt and a little black pepper but it also needed more acidity to make the flavours sing.  I thought the tomatoes would have added enough acid, but it needed another two tablespoons of white wine vinegar to enable the subtle flavours to shine through.

Its a very light soup and I’ve since found that serving it in a mug accompanied by a sandwich makes it a sunny moment on a cold winters day.

And essentially per serving it is zero Weight Watchers pro points.