Hubby worked very hard yesterday, he took a digging day off work and went to work on putting my lovely cabbages, brussel sprouts, purple srouting and cauliflowers in. I think I may have overdone the sowing of seeds a little. But as we are trying lots of different varieties it may well be worth it.

I put in the lettuces, there are quite a few, but when the peas come good, braised lettuce with peas is a lovely dish.

Including the infamous speedy seeds! which look like they have lots of lovely different types in. No bagged lettuces for us this summer!

The strawberry bed has been cleared and replanted, although not in a very uniform way, it was just a question of filling in the gaps with a few shop bought plants, so you will have to excuse my lack of straight lines. 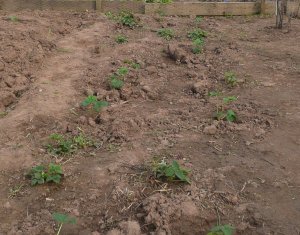 An anomaly, if you look closely at this picture you will see a row of four blackcurrant bushes. One of which is in full flourish, the rest are some way behind. Why this has happened we have no idea. They are all the same variety, bought at the same time, planted in the same way, pruned last year at the same time. Odd isn’t it? 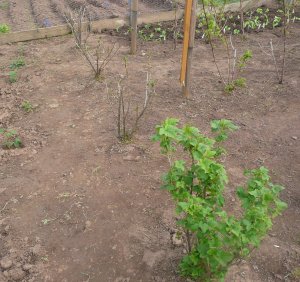 And lastly but by no means least a pair of socks for my Dad. Although he is very much on the mend his feet have swelled up and apart from one pair of socks that I knitted him for Christmas, (which he has yet to try, so may not fit) none of his socks fit him.To be sockless is a dreadful thing and there was only one remedy. A ball of wool and some knitting needles were hastily put to good use. I cannot find the ball band but it is a Double knit, probably Regia, using 3.25 mm needles and casting on 64 stitches made to a generous size UK 11 feet. I cast on using the two needles together method which gave a very nice and stretchy top. I took them in last night and although huge they fitted him lovely. I suspect he’s wowing the nurses with them as we speak. I need to get going on a second pair, I thought cotton and a lighter weight as it is getting warmer. So my knitting friends, do you think that if I cast on 100 stitches in a 4ply cotton on 2.5 needles they would be big enough? 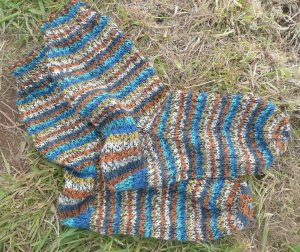 To add I’ve just found some extra roomy cotton socks on the net which I have just ordered for him, hopefully these will be big enough.

3 thoughts on “Veg and socks”