Casting a critical eye around the kitchen I noticed that there were two loaves of stale bread hanging around. Which is when I thought about my grandmothers wonderful bread pudding. They should have built castles with it, it was that solid it would have kept the cannon balls at bay, but it was very tasty and there was always a scramble for it if my mum was lucky enough to bring a tray of it home. My grandmothers was the standard bread pudding mix, this has turned into bread pudding with a little something added.

I knew there was some banana’s that were getting to the extremely ripe stage and so an idea was born.

I found dried fruit from Christmas along with some lovely candied peel and I was on the scent of hubby’s secret stash of Wood’s Rum. If you like rum, you would love that.

1 stale loaf
less than a cup of milk
3 banana’s
a few handfuls of dried fruit
half an handful of candied peel
2 tables spoons (or one good slosh) of rum
2 eggs, beaten.
4 oz (or there abouts) brown sugar
1/2 tsp cinnamon
1/2 freshly grated nutmeg.

So after cutting the bread up into smallish cubes I soaked it in less than a cup of milk. Leave it to soak for a while.

I soaked a few handfuls of dried fruit in a few tablespoons of rum,

after soaking I added them to the bowl of bread and milk. Mashed three bananas together and added them. The smell of the banana’s and rum was divine. Resisting the urge to pour myself a snifter, I added the rest of the ingredients to the bowl. 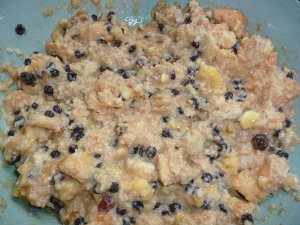 I then divided the mix between two loaf tins 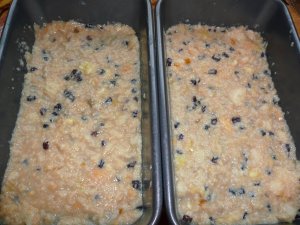 and placed in a pre heated oven of 180 C for about an hour. It might take longer, just make sure its not wet in the middle.

Leave in the tin to cool.

Then cut up and enjoy. 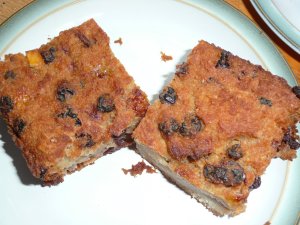