Me, that is. Spoilt. To the extreme.

And, I am silly excited.

Because, well, hubby (who I wish I could work out when he is feeling generous because I am female and I would use this to my advantage!, but after twenty odd years I still haven’t figured it out!!) has bought me a supa dupa brand new quilting sewing machine today.

I went to my sewing morning on Friday and showed the girls the blocks I had sewn for my quilt and bag. They liked them but observed that my sewing machine needed attention. I told them about the troubles I had had with it recently. To give you some history I bought this sewing machine second hand off a girlfriend of mine over twenty years ago, I think its probably about 26 years old. It has its grumbles but is generally a good solid machine if you don’t ask it to do something too tricky or buttonholes, its never done buttonholes, the part for the button holes on the machine had broken a very long time ago. But I loved this machine and it has made lovely waistcoats and shorts, curtains and quilt covers, and all sorts of odds and sods for the parents and teachers association in two different schools. At Christmas for fairs and panto’s you could see the smoke coming off it.

Anyway it needed a service and on the way hubby asked me whether it really was worth servicing and getting up to speed, bearing in mind that they probably won’t have the parts available, re button hole part and rickety sewing table (a plastic plug that stabilises the table had long since broken away).

And I could see what he was saying, but thought well actually, spending on a machine at the lower end of the price bracket is going to give me a machine that is of a much less quality than the one I have now. So I explained that to him. (I think that might be the key – impart information to your husbands so that they can come up with the same opinion as yourself!) And to be honest I had started reading around about machines so I knew what I was starting to look for.

So we took my lovely Singer Serenade in and it was as we feared, the parts for the button hole and table were unavailable and if something needed replacing whilst it was being serviced it would either entail a pricey part or.. no part at all. You could hear the death knell ring loud and clear.

So we looked at machines and after hubby had recovered slightly from how expensive they really can be. He started to look seriously at machines, which left me slightly shell shocked as just half an hour previously I was taking my rickety sewing machine for a service, not thinking about a new machine. I needed time out and access to the Internet. We came home, drank tea and chatted whilst looking at sewing machines on the net. Then a phone call was made to see if the shop would price match, which they would and we were driving back to buy a supa dupa does everything you could ever imagine (and more!) quilting sewing machine.

I’ve spent about six hours, probably eight, reading the manual, threading the bobbin and the machine and doing silly things with it. But the thing I’m most proud of, are my buttonholes…

There are ten types of button holes on this machines – you could go giddy just thinking about that! 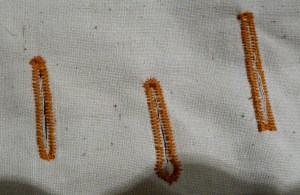 I don’t know whether it will make my 1/4 ” seams any more accurate, but it really is going to be fun trying.

Oh and I get to have a days free tuition with it as well.. How glam is that!!!!