Whilst making the front door curtain and realising that it was indeed a couple of inches too short many memories came to the front of my mind of my childhood, one which was basically and in a word cold, it wasn’t just me, it was the way it was then, no one or not many had double glazing, or central heating. Perhaps a snake would solve the problem of drafty moments and cold hallways. And I must say this before I start to tell you how our own friendly snake was born, I have never known my study and hallway quite as warm as this. Perhaps this is a little something we should be teaching or making for our offspring or friends, those that live in slightly drafty homes.

Firstly I have befriended local firms that make curtains, soft furnishings and sofa’s. They have given me some of their sample books of which I have been very grateful. So when my thoughts of how to make our snake, I knew exactly where to turn.

Firstly I measured my doorway, and then knowing exactly what measurement I was working to I started with the slithery underside, 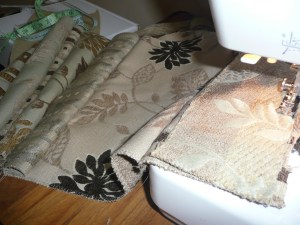 and played with the materials available, cutting and sewing to make a stripey effect.

Then, and this I had the most fun with, the colours that I love so dearly love. 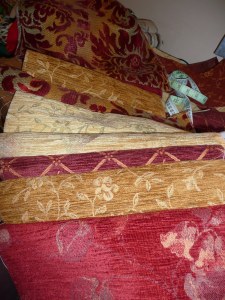 reds and golds for the top. And I was very lucky indeed to find a very large sample that would do very nicely for the head. 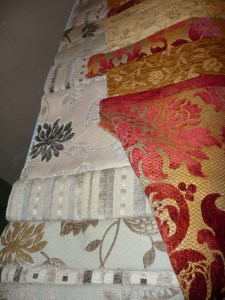 the two sides together just after pressing. 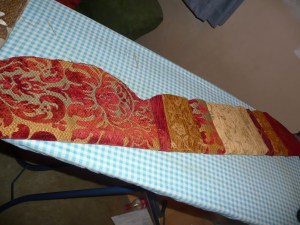 and then I cut out a snake (well almost) shape. 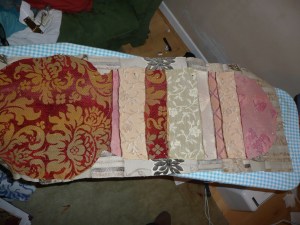 popped that on top of the underbelly and cut them out again.. And then I realised there was one thing missing…

a forked tongue. Well all snakes have one of those don’t they?, even friendly snakes.

Sewn together and waiting to come alive..

Stuffed, – I’ve been asked about stuffing so although I have some expensive stuffing which is used to stuff childrens and babies toys, hubby and I trundled over to our nearest supermarket that is Very Cheap, that sells pillows and we bought several of them. It worked out much cheaper, I would say half the price for the same amount of stuffing and its light, it has all the required kite marks for fire resistance and we didn’t pay postage. This snake took three pillows worth of stuffing, but he is quite large. On the other hand, if I was giving to a baby I would use (just to be absolutely sure) the stuffing that is safe for babies, one can never be too careful. But again on the other hand babies must sleep on pillows, so it can’t be that bad.

I started to think about eyes, and then, 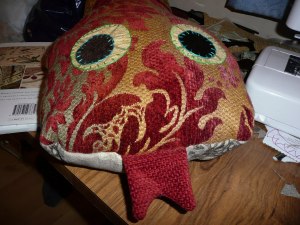 I blanket stitched them on with a bright green and a saturated teal embroidery thread. 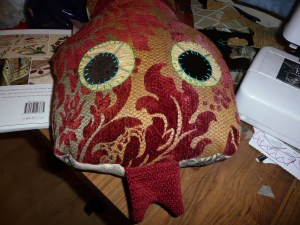 And snake then came alive, 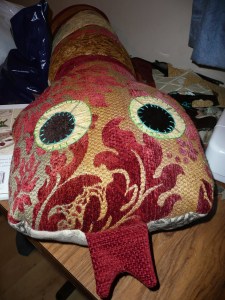 and during his first words he said that he quite liked the name “Snake” probably because I chose that word during his embryonic stage! Snake decided that he would like a little look around,

he slithered down the banister which he completely adored,

wandered around the living room and rested on the buffet,

whilst examining the hall and his nest to be peeked out from under the curtain,

showed me how proud he was of his underbelly,

and finally settled on his home, of which he found he was a perfect fit.

Snake settled for the evening, he has told me he is most happy here.

4 thoughts on “A reptile hatches!”