Hubby and I decided we needed a break so I did my usual ebay hunting which involved plugging in the words ‘Holiday Cottage Easter’, you would be suprised what bargains are to be had when you want a last minute holiday and sure enough up came a very pretty cottage in North Devon. Just over 24 hours later, after giving ‘the children’ strict instructions not to burn the house down, feed and water the dogs and please don’t have a party, (at least not one where the police would be called) we were off. It has been forever since we had a whole week to ourselves and we quickly became good company for each other and pottered around North Devon quite amiably.

First there was rock pooling.

Hubby scampering over the rocks, I am not sure footed these days so my feet stayed firmly on the sand. 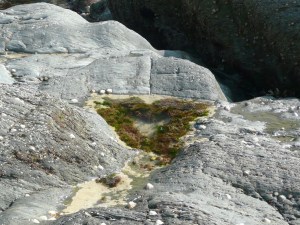 There were beautiful rock pools, this one in the shape of a heart.

Gorgeous seaweed in greens that I adore.

Then there was crabbing…

Imagine my excitement when hubby thought he had a big ‘un!

Me in zen like pose, I was completely at peace listening to the seagulls and the waves crashing against the sea wall.

There were walks along beaches.

And time spent gazing out to sea.

A local Alpaca farm had an open day. 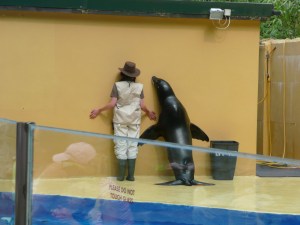 And we went to the zoo. 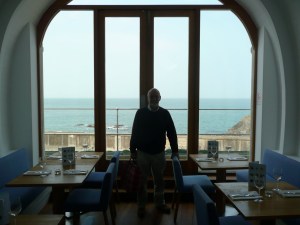 We went to a restaurant partly owned by Damien Hirst

Where his art is surrounding you. (fortunately not cows cut in half!)

We travelled to John Arbon’s new shop in Lynton and bought a jumpers worth of Knit by Numbers which is dreamily soft and is a very pretty tweedy green.

But the best part of the holiday, the absolutely best part was when Martin Storey invited us to tea. I’d emailed him to say we were in his neck of the woods and to ask him where were the best yarn shops which is when he told me about John Arbon’s new shop and then Martin invited us to tea. I was terribly excited and could barely contain my nerves, donned my best holiday attire and sun hat and ventured forth. Martin is lovely and made us feel most welcome.

He has a very beautiful home, with stunning views over the sea.

Hubby dwarfed by the size of the sitting room. 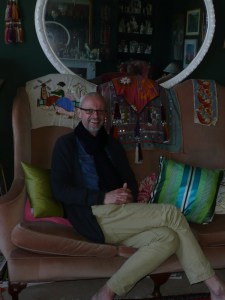 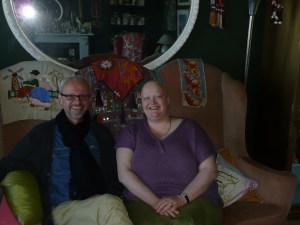 Martin and I chatted away for nearly two hours about all things knitterly, it was absolute bliss and a memory I will keep with me forever.

And as if our holiday couldn’t get any better, we watched the Royal Wedding, had a good lunch and started to think about packing when we decided we would wander around the harbor, we drank tea and I knitted and just as we were about to wander home we spotted a fishing boat unloading its catch and bought two lobsters live and kicking straight of the boat.

What a last supper! I dispatched them, sorted out the doings and lavished butter on them and roasted them in the oven, they were an absolute treat. 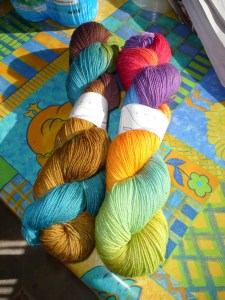 And then hubby stopped off at Get Knitted on the way home. The shop took my breath away, it is glorious.

And amongst all of this we had fine dining most evenings, ice creams and a most memorable cream tea. As I say, What a holiday!

8 thoughts on “What a holiday!”