Left to my own devices its become pretty clear to me that cooking big family meals is not high on my agenda.  I am quite happy to make a vegetable stir fry with rice or cheesy mash or any number of things that require very little in the way of ingredients and very little in the way of effort.  And the other thing that strikes me very clearly, especially when I start to feel very tired, is that I haven’t eaten any type of red meat for at least six weeks.  Which if your a fully confirmed vegetarian and your making sure your getting your green leafy veg on a nearly every day basis its probably not a problem, but if your not making any sort of effort to eat any iron, then maybe it should be worth noting.   When feeding a family, mince has been high on the agenda as a nutritious means of getting a good source of protein, high in iron,  into a hungry growing family as cheaply as possible.  And it seems to have worked because our boys are strapping lads.  We would probably have mince in its many different forms at least twice a week and a piece of beef brisket that would last for at least two meals, probably twice a month, so they never went short.

Mince – It was the first thing I gave up when coming to live on my own.  I just needed a complete break from it.  And as I couldn’t afford steak on my limited student budget and I don’t like beefburgers (which are basically another type of mince) I just sort of gave up beef.

So, about a month ago I fancied buying some beef mince and as my student loan, how shall we put this, I’ve sent the same paperwork in three times and I’ve still not been paid and won’t be for at least another week, and that’s if it goes well this time, the mince has come to the top of the freezer.  And whilst I still have potatoes, I thought a family cottage pie was called for.

I fried some onions with garlic, added the mince and browned that off and added two tins of tomatoes, a beef stock cube and the rest of the frozen peas.  Simmered it all down for a while. 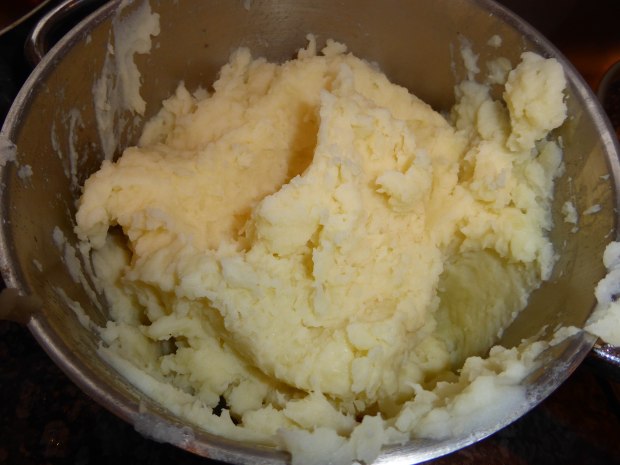 Made a big pan of mash

and dolloped (such a great word) it on.  One tip worth passing on, if you fancy dolloping your mash in a similar style, use a wooden spoon.  Seriously the mash doesn’t stick to it like it does a metal spoon.

Made pretty patterns to aid the making of the crunchy tasty titbits.

And cooked in the oven for an hour and a quarter.

And served with freshly boiled carrots.  The rest was portioned up and placed back in the freezer for nights when only some comfort food will do.